Both captains won the toss in their previous games and elected to bat. However, they both lost the matches so they may well revert to chasing in this game.

Most of the matches in Chennai have seen teams post scores in the range of 145 – 160. We expect similar totals in this game with the pitch particularly conducive for pace-off bowling. 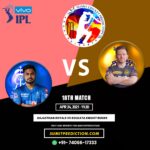 The bottom two sides in the 2021-22 BBL, Melbourne Stars and Adelaide Strikers, go...